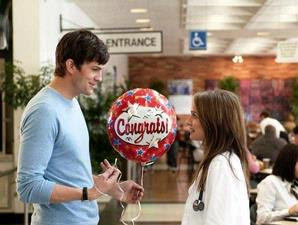 In the film No Strings Attached, starring by Ashton Kutcher and Natalie Portman, told how the figure of Adam appears in the office of his girlfriend, Emma, with a balloon. This turned out to make her angry, because he thinks Adam violated the agreement that they will not show their relationship in front of others.
This was not just a typical scene sitcom. Dr. Terry Orbuch, social psychologist who has studied 373 couples married for 24 years, said the incident is based on the fact that men are more romantic than women.

When interviewing these couples, Orbuch found that husbands tend to describe their wives in a traditional romantic terms, while their wives talked more practical about their relationship.
"When we asked the husband to tell how their initial meeting with their wives, their story is more seasoned in a romantic," says Orbuch, which presents the results of his research in book 5 Simple Steps to Take Your Marriage from Good to Great. "They told me how they are fascinated, extraordinary love, and they use terms like 'soul mate' and 'love at first sight'. Contrary to this, the women told how they were careful in their partners when they first touch, and keep them in no hurry to approach. "

The statement also appears in the attitude of love. Though this romantic gesture varies between one and the other couples, but according to Orbuch men tend to uphold the belief in fairy tales like "happily ever after" than women.

The results of this study seems in line with the results of a survey of 21,000 men and women who made the site Queendom. When responding to questions about love, men were more romantic in describing it, using an expression that women tend to be avoided like "destiny" or "love conquers all". It is quite surprising, because, "Most men tend to be judged not romantic. But you must understand why is it, to appreciate them," said study leader, Ilona Jerabek, PhD.

That men are not romantic, a bit much this is influenced by tradition. Relatively difficult to praise them, and talks about the deepest feelings of the heart is not usually done. "Men do not get the affirmation from friends and family in the same amount earned by women," says Orbuch. "They rely on positive feedback that they can be in relationship with a partner to their overall mental wellbeing."

A study from Wake Forest Psychology professor even said that men are fitter when they are in a relationship. This could explain why they tend to praise their partner as soul mates, for emotional and physical needs that are difficult they can be finally fulfilled.

Well, then, if men are so romantic, why do they get the opposite reaction? According to the researchers, this is more due to misunderstanding. "Women are more reacting to the words, so they want their partner repeatedly expressed his feelings," says Orbuch. "While the men react to the behavior, so they tend to show feelings through behavior. As a result, yes, baseball disconnected."

To anticipate this, Orbuch advises couples to understand the limitations and needs of their gender. Women can say "I love you", but the three men would rather express it by to pick up their partners from the office, or accompany shopping.
Posted by Nicole Smith at 8:57 PM